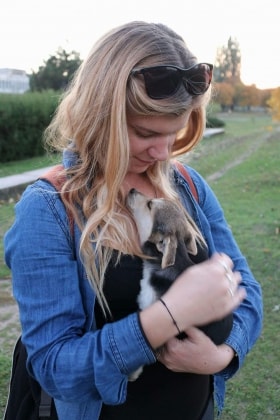 I'm Jessie I am an international Pawshaker, having Pawshaked in England, New Zealand and Canada.

I offer day feeds for all animals and overnight. When sending a message please let me know what area you are based.

*Note: I am currently only available for day feeds between 1st April to the 8th May*

I have owed animals most of my life, my fur babies have included many cats over the years including Trout who lived until she was 20, two lovely gentle Flemish giant rabbits, two mice, two frogs, numerous fish and seven beautiful adopted Rats.

I spent 6 years volunteering at the SPCA (Society for the Prevention of Cruelty to Animals) Māngere in Auckland, New Zealand. My main job while volunteering at the SPCA was training, grooming, feeding and walking of dogs of all sizes and ages. Also working closely with abused and uplifted dogs. In the later years of volunteering I fostered cats, kittens and rabbits. Which included nursing sick animals, playing with shy animals and giving love before the fur balls were ready to be put up for adoption.

I am a self-confessed animal lover, I know how much animals mean to us, I will strive to look after your babies as if they were my own.

I am happy to stay at your house to keep your fur babies company for as long as needed, I will also do the not so fun tasks like water the plants, bring in the mail and put out the rubbish/recycling bins.

Full refund if cancelled before noon one day before the booking, 50% refund afterwards

Jessie was really helpful with my puppy who is currently injured. She was great at taking care of Neo as I had asked her and updated me after her visits. Will definitely request her help again.

Jessie's service was great! She communicated frequently and sent me updates and photos of my cat Opie, while we were away. She was very easy to organise key pick up's with, and I would highly recommend her services for anyone who is always nervous about leaving their pet! Thanks again Jessie :)

Full refund if cancelled before noon one day before the booking, 50% refund afterwards